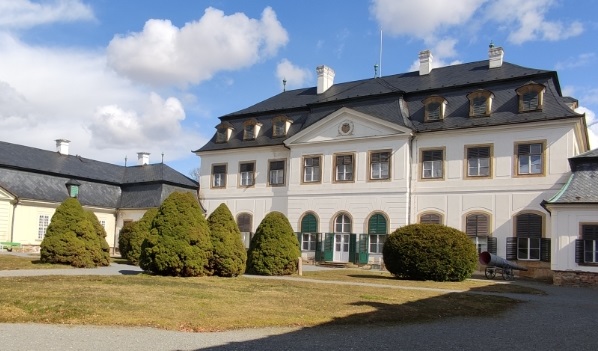 In 1726, the Náměšť seigniory bought the Harrach family, which belonged to important families of the Habsburg Empire. The Lower Chateau served as their seat. At the end of the seven-year war, Count Ferdinand Bonaventura of Harrach began

with the construction of a new chateau (the foundation stone laid on 1.3.1766) near the ruins of a medieval castle. The new summer residence was built in the most modern style of the Early Classicist "Moravian" Baroque with French architectural influences. For the new chateau there is the name of the Upper Chateau. The former residence is called Lower Chateau (today a malt house).

The castle is surrounded by a circular park and linden alley runs all over the world. The last major modifications were made in 1925 by the garden architect Křemen. Its disposition belongs to the most important buildings in Moravia.

North of the castle was built in 1672 the Chateau Chapel of the Holy Trinity, which was consecrated in 1722. Today's empire has a chapel from 1834.

An important building, connected with the history of the castle, is the tomb of Kinský's family, which they built in 1871 at the newly founded cemetery in Náměšť. The tomb is built in Empire style and above the crypt there is a chapel with a wooden altar. There are three generations of the Kinský' family squares in the tomb.

In 1778, after the death of Count Harrach, he inherited the castle of his daughter, Mary Rose, Countess Harrach. From 1777 she was married to Count Josef Kinský. Kinský were, as Harrach, one of the most prominent families in the empire and lived in Náměšt 124 years.

The last Kinský in Náměšť, Evžen II., sold the chateau to František Ottáhal, a wholesaler with iron in 1916. Ottáhal's husbands have modernized the castle.

After the death of František Ottáhal, in 1943, the chateau was inherited by his wife and children.
On June 17, 1945, the property was confiscated by a family according to Beneš's decrees. It was one of the first confiscations in Czechoslovakia.

By the end of 1999, the chateau was administered by the Museum of Natural History in Olomouc, from 1st January 2000 to 30th June 2000 SSHZZSM (Administration of State Castles, Chateaus and Gardens of North Moravia). Since July 1th 2000 the chateau has been owned by the city of Náměšť na Hané.

Change in appearance, Structure of pages, print out